Village of Kasaan; a Historical Perspective

While we are preparing to hike into the Salt Chuck mine with our drones to take some aerial images for our next Kasaan mine blog, I thought that I would write a short note on the interesting history of the village(s) of Kasaan which we have referred to in a pastblog and in our overview of the communities within our AlaskaRainforestRealty.com website. 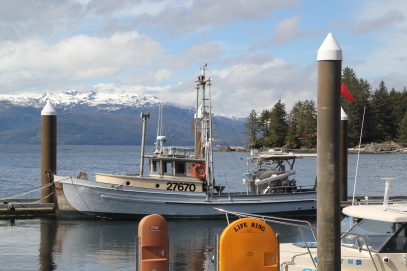 To begin, today’s Kasaan is a native Haida village in a picturesque setting located about 17 miles from the Goose Creek turn off on the South Thorne Bay Road. The name “Kasaan” derives from the Tlingit word for “pretty town” or “pretty village”. The name was given to the old abandoned Haida village located just to the south on Prince of Wales Island. The village that we call Kasaan today is the “New” Kasaan, i.e., the Organized Village of Kasaan (aka OKV).

As noted in our past Copper Queen blog, Charles Vincent Baronovich founded New Kasaan in the late 1800’s with the expectation of developing a successful trading post and making his fortune in copper. At that time, the Haida village just referenced existed on the north shore of Skowl Arm.

The Haida were a rather fierce people who migrated north into Tlingit lands from British Columbia’s Haida Gwaii Islands (formerly the Queen Charlotte Islands) to Prince of Wales Island. The now abandoned village is believed to have been the northernmost Haida encroachment into Tlingit territory. To reduce confusion, I’ll refer to today’s Organized Village of Kasaan as “Kasaan” and the abandoned Haida village as “Old Kasaan”. Kasaan developed following construction of the Copper Queen mine’s camp, sawmill, post office and store which were built in 1892. The new opportunities in Kasaan attracted the Haida of Old Kasaan and the old Haida village’s population began to migrate to Kasaan. 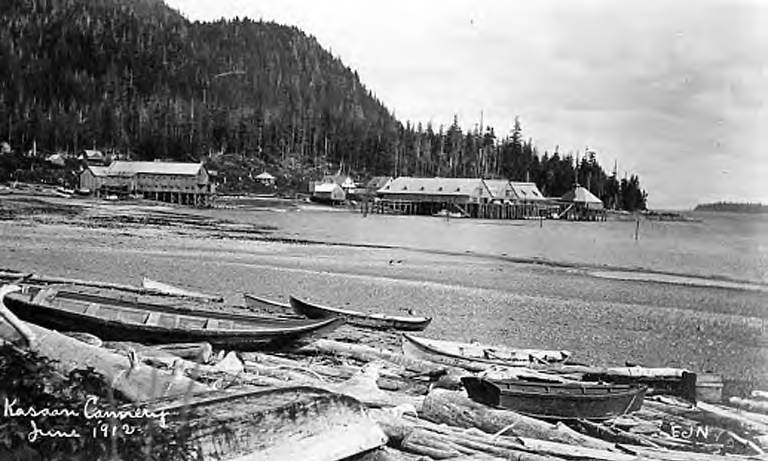 Opportunities in Kasaan appear to have ebbed and flowed in the late 1880’s through early 1900’s – arguably a bit more ebbing than flowing. Copper mining operations in Kasaan were plagued with misfortune over those years. As a result, management of the nearby mines changed hands several times. In 1902, seeing the prospect of a new opportunity, one of the mine’s operators, Kasaan Bay Mining Company, established a salmon cannery in Kasaan. Unfortunately, and consistent with the ebbing cycle, their entrepreneurial salmon cannery venture lasted only about 4 years before the company declared bankruptcy. The cannery’s new owners fared badly too. The cannery burned in 1907, 1910, and again in 1911. Fate was not smiling on the cannery during these early years.

However, a bright spot, under the new management of Pacific American Fisheries, the cannery enjoyed a large pack of 167,451 cases of salmon in 1941. This success followed an earlier, unsuccessful attempt (1938) by the cannery to pack and ship razor clams brought in from British Columbia’s Haida Gwaii Islands. Over the years, the cannery was operated by six different companies and finally ceased production in 1953. The three stores that sold supplies during the cannery days, the Presbyterian church built in 1908, as well as other structures now are gone or in a deteriorated condition.

A structure that has enjoyed restoration by the Civilian Conservation Corps in the 1930’s, the US Forest Service in the early 1970’s, and more recently by native craftsmen and workers is the Whale House built by Chief Son-i-Hat near the new village of Kasaan. The Whale House is the only standing Haida longhouse in the United States. Totems relocated from Old Kasaan on Skowl Arm to Kasaan (i.e., Organized Village of Kasaan) are part of the Kasaan totem park.

The Alaska Native Claims Settlement Act (ANCSA) village corporation, KAVILCO and the Organized Village of Kasaan have created a pleasant and culturally interesting experience with the totem park’s well-maintained trails, totems, and Chief Son-i-Hat’s Whale House. KAVILCO Inc., who owns Chief Son-i-Hat’s Whale House, has partnered with the Organized Village of Kasaan to preserve and protect the Haida architectural form and physical structure of the Whale House.

(Personal note: This is one of my favorite places on the Island – picturesque, serene, and with a palpable connection to the past. Thanks to OKV, KAVILCO, and others for their efforts.)

The heydays of mining and salmon canning are gone from the Kasaan founded by Baronovich in the 1800’s. However, mining and canning remain an important part of the village’s history, culture and spirit — as is Old Kasaan.

It might be what’s left of the instructor in me but I cannot help but add a very brief note of the final, somewhat sad, chapter in the history of original Haida village of Kasaan, i.e., Old Kasaan. The significance of the abandoned Haida village was recognized in the very early 1900’s by a number of influential people and organizations. An early advocate for preservation was William Lagille, the first manager of the Alexander Archipelago Forest Reserve. (The Reserve was designated by Theodore Roosevelt in 1902 and was the predecessor of today’s Tongass National Forest.) Their efforts led to Old Kasaan being proclaimed a national monument by Woodrow Wilson in 1916. However, the Monument’s designation was to be short lived. A devastating fire that occurred in the summer of 1915 had destroyed many of the Monument’s objects. Consequently, in 1938 the U.S. Forest Service’s local District Ranger reevaluated the Monument for preservation. His assessment led to subsequent negotiations with the natives to relocate the totems, and to restore Chief Son-i-Hat’s Whale House. Initial restoration was completed as a Civilian Conservation Corps (CCC) project under the auspices of chief carver James Peele. However, due to the loss of many of the Monument’s objects and the decision to relocate recoverable objects, the 38-acre national monument lost its designation in 1955. In a sense, today’s Kasaan is the phoenix of Old Kasaan.

The reader may find the following websites of interest, their addresses are included in the references: (1) Simon Frazer University provides a description of the poles at New Kasaan; (2) The Organized Village of Kasaan, and (3) Kasaan Haida Heritage Foundation.

I have relied heavily on the following resources. I continued to be amazed at the amount and often quality of reference material available online. I recall my days as a graduate student pouring through card catalogues, xeroxing material and running programs in the bleak, early morning hours at the university. This is better by far! Special thanks to those referenced below.